The words appeared in the comments section of a Facebook post. The post was a video clip by a black activist who argued brilliantly — IMHO — that it’s not enough to change hearts and minds about racism. What’s necessary is to work for systemic change. The comment-maker claimed that American systems are not racist at all, people are. This, despite our country’s four-hundred-year history of obvious systemic racism — including those systems in government, finance, education, and religion.

I read the comment, bit my lip, sat on my hands, and told myself not to engage with someone I don’t know and whose mind is probably set. Here it comes … Hold your ears … Thanks for allowing me to scream! 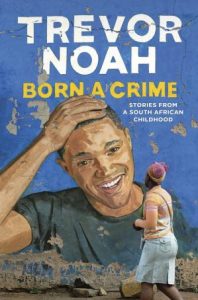 Interestingly, I had just finished reading Trevor Noah’s engaging autobiography, Born a Crime. I love this guy whom I only know through his TV show. Talk about systemic racism! Trevor lived through the dismantling of Apartheid and survived thanks to his single mother. She was an intelligent, brave woman who left her Soweto home to try to find a better life. She convinced a German-Swiss man to father a child with her – no strings attached – and the product was the bi-racial Trevor. She taught him how to read and write English, as well as master a variety of tribal dialects so that he could interact more easily with more people.

There are so many sad and delightful stories in this brutally honest book – I highly recommend it – but one issue hit me in the heart. Because he was bi-racial, Trevor  had a hard time fitting in to any one group, and he had choices: white, black, colored. He was able to navigate through the variety of schools he attended and neighborhoods he lived in, identifying mostly with black groups.

However, whenever he returned to Soweto to visit his black relatives, he was treated differently from his black cousins. Because he was part white, he was treated better! One example: he wasn’t chided for his misdeeds – and there were many – as severely as other black youngsters.

It was as if those relatives bought into the notion of white supremacy! Even a partially white child had supremacy over all black relatives. Sit with that for a moment.

I remember reading articles years ago about what constitutes beauty. Young black girls thought white characteristics were more beautiful than their own. Hence, the Black is Beautiful campaigns.

Of course, hearts and minds need to be opened and changed. But, even more effectively for the future of this country, so does any system that deprives anyone of life, liberty, and the pursuit of happiness. That’s something to scream about.