Nothing More to Lose

It happens this way…

Thanks to all of you who   have already pre-ordered Nothing More to Lose, my poetry chapbook based on based on Therese Kolbert Dieringer’s autobiography, My Life Lived and Remembered – A journey through Hungary, Germany, and America.

There’s still time to order your copy at its pre-publication price.

Nothing More to Lose is a 60-page chapbook filled with poems written in Therese’s voice.  It contains photos of the Kolbert family as they journey across Germany. It ends with a series of “Corky poems” that capture Therese’s meeting, marrying, and traveling with her dear husband of thirty years.

“In Nothing More to Lose, Carolyn Martin has read and written my soul. No one has been able to feel what I felt before this poet shared her inspired words with me and now with the world. I spent more than 70 years trying to forget the events that shaped my life and gave me nightmares. Now, through working with Carolyn on both my autobiography and this chapbook, I feel healed. The nightmares are gone. I hope these poems will help readers find courage in the realization we are not here on our own. We are guided by a Higher Power. This book is a good way to end my journey.” 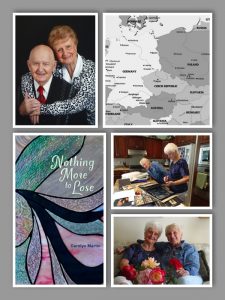 For several years I had been playing with the idea of writing a series of poems based on the journey of a dear friend whose family escaped Hungary after the Nazi invasion in 1944. They spent the next seven years starving in Germany before finally arriving in the US in 1952. I had helped Therese Kolbert Dieringer write her autobiography in 2007, and her stories of terror, cruelty, and kindness haunted me ever since.

Then, this past July I focused on some ideas about Therese’s journey I had filed away and they began to shape themselves into a poem. I sent it to Therese and asked for her blessing — not only on this one poem, but on the idea of a chapbook based on some of the major events in her life. With tears in her eyes and voice, she said, “Yes,” and this chapbook was on its way.

The miracle to me is that I wrote the 25 poems in it in about six weeks. I never worked that fast before, but the material of Therese’s life was so compelling, that the poems wrote themselves.

Now thanks to Shawn Aveningo Sanders and The Poetry Box, Nothing More Lose is available for a pre-publication sale price. Read more about the book and how to order it before December 1.

You would do me and Therese a great honor if you would consider reading her story via my poetry. You will be amazed and inspired. I was.