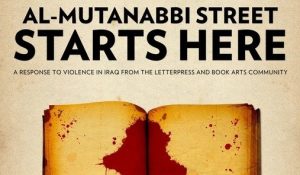 Next Saturday, March 7, from 2-4 p.m. the Ledding Library in Milwaukie, Oregon, will host its annual bilingual poetry reading. The event is a collaboration with the Al Mutanabbi Street Starts Here! Coalition and the Iraqi Society of Oregon .

Twelve poems will be read, six in English  with an Arabic translation and six in Arabic  with an English translation. Since both languages are considered to be among the most poetic, the result should be an auditory delight for the audience.

The library explains the origin of this collaboration:

These readings are part of the response to the March 5th, 2007 car bombing of Al-Mutanabbi Street in Baghdad, the ancient booksellers street. The car bomb was an attack on life and on the property, 30 people were killed and 100 wounded, but it was, as well, an attack on culture and on the free expression of ideas. Following this attack, the Al-Mutanabbi Street Starts Here! coalition was begun by Beau Beausoleil, a poet and bookseller in San Francisco, and has grown over the years to include over 600 works of art and an anthology of writings by poets, journalist, and novelists. These works are exhibited around the world and contribute to conversations and the creation of connections, in support of the Iraqi people. Portland is now the home to over 2,000 Iraqi refugees who have fled the ravages of war.

It’s my pleasure to join five other Oregon poets who write in English. Here’s my contribution: one of the few lyrical poems I’ve ever written. I can’t wait to hear how it sounds in Arabic!

to guide, one constellation to bet

a myth upon, one quasar to break

the dark. The rest is ornament.

One mountain to announce it’s ripe

for bulbs and seeds to multiply

without a first or second thought.

A frenzy of birds at sleeptide’s ebb,

tornados of gnats at dusk’s flow.

Days that warrant wilding up.

A word for grace or luck or hope

when the mountain blocks my star.

In-the-bone love for all that’s lost.

Something born to lead me home.