It Happens This Way … 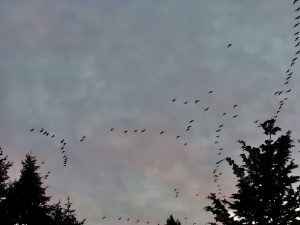 Since it’s that time of year when flocks of noisy geese migrate across our skies, I thought I’d reach back to a poem I wrote ten years ago. It’s still true that we see groups of them flying in one direction in the morning and flying in the opposite direction at night. And it’s even truer that their formations are more “disheveled and disorderly” than in the past. What is Mother Nature telling us about the changing dynamics of leadership that the neat metaphor of geese used to describe? And that independent female at the end? Hmmm … an image of all the strong women who have been flying high in this past decade?

they are the same—

these squads of Vs,

as if a pre-school child

is scribbling lines across

mis-scratched the itch to find

The calendar was right,

but something else went wrong.

What is that common saw

or snubbed the call to acquiesce.

Before I wrap my mind

around the science of it all,

one lone goose breaks through

A day behind, she missed

and all such idioms

She’s older than the rest,

I fantasize. She’s been around

the clouds a thousand times,

the myths of leadership.

She doesn’t care about uplift

or saving energy to cover ground.

No wingmen or honking cheers.

No urge to lead or tilt

of head as they fly by.

And just as black lines disappear

beyond the Douglas firs,

she strains her neck and lowers

by one lone raucous cheer