Twenty years ago today, I settled in the front row of a hotel conference room after delivering a management training presentation to 300 people in Orlando, Florida. I had just taken a few deep breaths when the back doors burst open and hotel personnel rushed in to tell us about the attacks on the World Trade Center. In those first surreal moments, people rushed from the room, scrambled to call home, book flights (the airports were already closed), and grab rental cars that would drive them all around the country.

For the next three days I was hunkered down in a darkened hotel room doing the worse thing I could do: watch the continuous stream of news about the horrors unfolding in real time. I flew home four days after the attack.

A month later I was in NYC, standing in front of another audience. I had already taken the subway down to ground zero, talked to as many policemen, -women, and citizens I could find, and heard stories of tragedies and miracles that haunted me for years.

Then, last September 11, 2020, I almost forgot to commemorate the day because we were preparing to evacuate from near-by fires. Ultimately, we were blessed not to have to leave our home. Now in the year that brings us to another September 11, fires, floods, deaths, upheavals around the world remind us again and again that, on any given day, we have not here a lasting city.

Here’s a poem I wrote that unites last September with the original event. It will appear in The Poeming Pigeon: From Pandemic to Protest which will be released on October 15, 2021. For information, go to https://thepoetrybox.com/taking-pre-orders-tpp-pandemic-protest.

While I check out evacuation routes and pray

our packed cars are precaution not necessity,

thousands have lost all there is to lose except

each other and maybe a treasure or two: a dog,

a cat, livestock raced to fairgrounds, a teen’s diary.

war-weary firefighters who breathe the unbreathable.

Meanwhile, my mother lies in a NJ nursing home.

She can’t remember if she ate her lunch or how

to answer her phone. I watch her mind slip

into the smoke that wipes out our Douglas firs.

Today she doesn’t know her air is clean

or that nineteen years ago, she breathed the ash

of 3000 souls drifting by in another blackened sky. 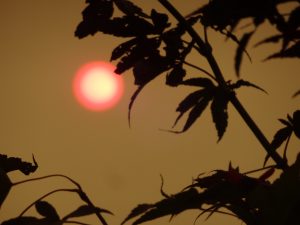